If I was to be totally honest, I had pretty much forgotten about Halloween this year. With all the uncertainty we have all be experiencing, it was the last thing on my mind. It wasn’t until a little notification popped up on Facebook a few days beforehand that I remembered I was going to be attending a virtual Halloween party on Animal Crossing.

To get into a Halloween spirit, I tried to purchase as much candy as I could for the other villagers on my island as well as creating a number of scary costumes. Before I headed off to my friends Island, I spent some time taking part in the events on my own Island, including giving plenty of candy to Jack too!

After about an hour I headed over to my friend’s Island. I knew she had been working hard on redecorating every aspect of her island and making it all spooky and scary. There were a number of events for everyone to take part in including a costume competition, spooky scary photo shoots, and a haunted house tour! Needless to say, it was great fun and I was blown away with how much work she had put into redecorating!

I had a great time and even won the costume competition overall. While it felt surreal not doing anything in real life for Halloween (which for me isn’t very much anyway) it was lovely to catch up with friends and have a fun and spooky time virtually instead.

Here are a few of the many screenshots I took from the party! 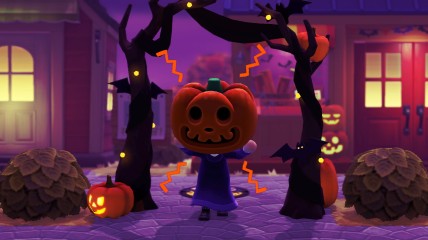 What did you do for Halloween this year?