It’s somewhat hard to comprehend that The Sims is turning eighteen years old this month! It seems like just yesterday that I had discovered the game. I have to say that I do have many fond memories of the game during its life so far.

I first discovered The Sims through my Dad. If it wasn’t for him I probably would have found myself getting into The Sims at a much later date. I do remember spending many days just sitting and watching him play The Sims. It was an alternative to playing Sim City for him and he seemed to enjoy from what I could tell. After a while and also after many occasions of me sneaking onto the game and playing his save file I was presented with my own Windows PC where I could play The Sims myself.  That’s where I really started to find myself becoming hooked on the franchise.

I spent so many weekends, school holidays and whatever time I had just playing the game. It was an escape from the real life playing with my Sims family. I remember the first time I managed to save up enough Simoleans to be able to buy the big mansion house only to discover I could have used klapaucius, rosebud or the good old !;!; after klapaucius for a crazy amount of Simoleans. I did, however, redesign and refurbish the whole of the mansion and even added an indoor swimming pool and gym. I was really proud of that build. I then discovered the expansion packs and that just made my experience with the game so much better.

My two favourite expansions from The Sims have to be Vacation and Makin’ Magic. Although each expansion added more to the game I felt that for myself these two expansions add the most for me. I do have to admit, like many other Simmers I did remove the pool ladder on more than one occasion and also trap my Sims in a room and well, you know how that one goes.

Fast forward a few years and The Sims 2 was released. I fell in love with the franchise, even more, this time with the addition of University, Seasons and Apartment Life. In all honesty, I loved everything about The Sims 2 and it still holds a big chunk of my childhood. I have to say that The Sims 2 is probably the game I played the most out of all the games in the franchise closely followed by The Sims 4. The stuff packs as well I loved as they added more objects other than just what the expansions offered. I spent so much time playing the University expansion and trying to make my Sims better people before they returned home. That didn’t always  work but I did my best.

The Sims 3, on the other hand, I was very late to the party. Despite buying the base game on release day from my local Blockbuster I didn’t really get into the game as a whole until about 2011/2012 when I picked up a couple of expansions for the game. From what I did play I really enjoyed. How The Sims team took inspiration and elements from the earlier games and put them into The Sims 3 made the game stand out for me. The amount of detail with a Sims in Create A Sim and when playing in Live mode was amazing. It’s something that I do miss a little in The Sims 4. The open world aspect of the game, teens with curfews, driving cars there is just so much to The Sims 3 that made the game what it was. Yes, the game had its flaws but it had lots of strengths.

I still play The Sims 3 from time to time now. I am planning on one day getting the missing expansion packs that I don’t have yet but the expansions that I do have I really enjoy them and what they add to the game. With any expansion for any game, you expect it to add so much more to what the game already has and The Sims 3 expansions went beyond what I thought they would add. My favourites from The Sims 3 have to be University, Seasons and Generations. In all honesty, I loved all them.

Now The Sims 4 has not only been such a lovely game to play but it has also been a game that has given me many opportunities. I decided to become more active in the community with The Sims 4 and as a result, I have met so many lovely people online through Discord, Twitter and Twitch. The game has also given my a wonderful opportunity to write about The Sims with The Sims Community Team and so much more.

Content-wise again I can’t fault what has been released for The Sims 4. There are packs that I like more than others but I use a mixture of content from all of them when I build. The idea of getting the community to help with the Laundry Day stuff pack I thought was brilliant and I love how the pack has turned out! Even though some of the options I voted for didn’t make the final pack what EA has given us is brilliant. Here’s to 2018 and what EA has in store for The Sims 4 this year! I also need to add that the console and handheld games have also been a pleasure to have in my collection as well. The Urbz, The Sims Bustin’ Out and the PlayStation 2 editions of The Sims and The Sims 2 were all incredible to play. I have lost so many hours of my childhood to Bustin’ Out on the Game Boy Advance and The Sims 2 Pets on PlayStation 2! Also, the soundtracks for each game are just incredible. The earlier games soundtracks do help bring back some memories as well and not only that with later games it’s helped me discover some brilliant artists like Sigrid who was featured in The Sims 4 Parenthood for her song Don’t Kill My Vibe. 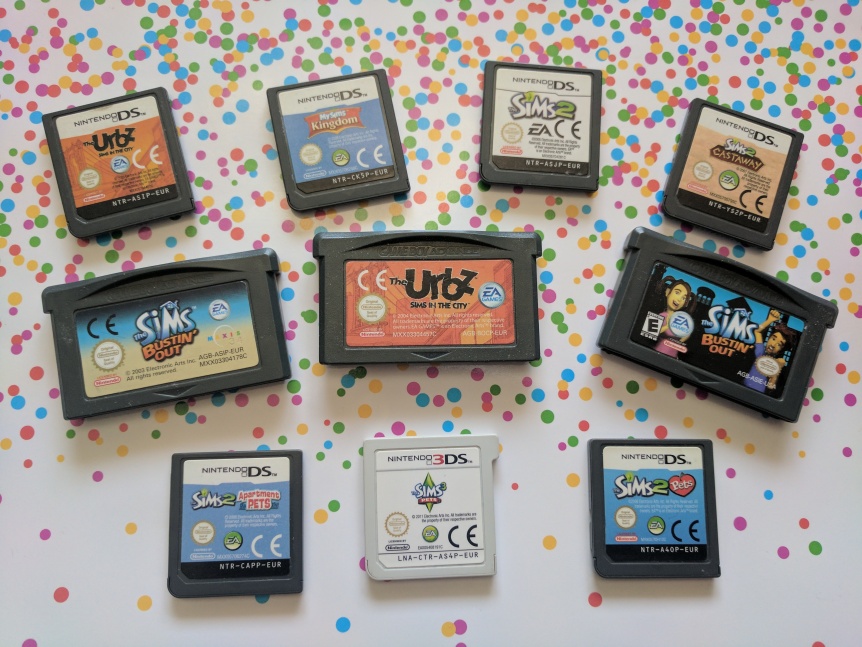 Happy eighteenth birthday The Sims! Thank you, EA and Maxis for The Sims and here’s to what the future holds for the franchise.